In this article, we will show how to extend an AIMMS app with a R model that generates a Sankey diagram using the networkd3 package. The R model is exposed as a REST API using the Plumber package.

We will use an implementation of the Blending problem, a classic application of linear programming. The objective is to find what composition of alloys should be blended together to make a final alloy with the required properties, minimizing cost. The model outputs the % composition of the final alloy - x% of Alloy A, y% of Alloy B, and so on. For example, using the provided data - a 60% Alloy B and 40% Alloy D mixture is the optimal way to create an alloy with 30% lead, 30% zinc, and 40% tin.

This breakdown can already be visualized in AIMMS WebUI using the treemap widget. 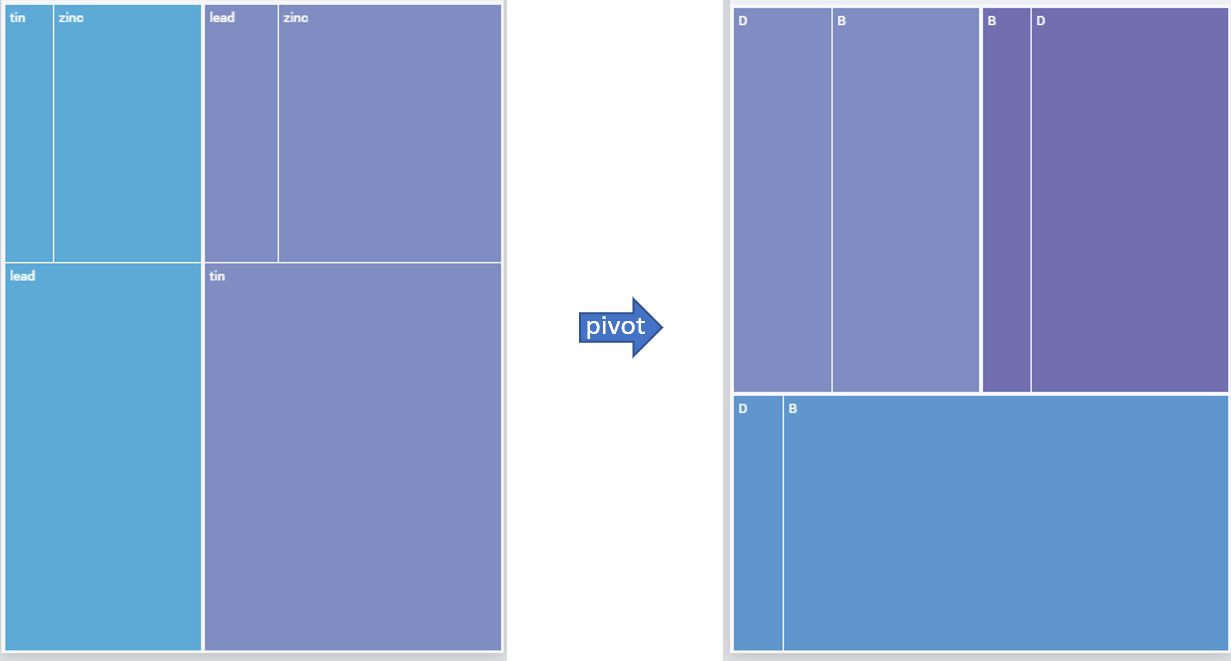 Fig. 37 Colors represent (a) alloys in the left image and (b) elements in the right image.¶

We can also visualize the same data in a Sankey diagram, which are typically used to visualize flows in multi-level networks. A sankey widget is not available in AIMMS and, instead of building a custom widget - one could use R (or Python) to generate the sankey diagram as an image. This example shows that in addition to running machine learning models, data processing and transformations, R / Python can also be used to generate visualizations for your AIMMS WebUI application. 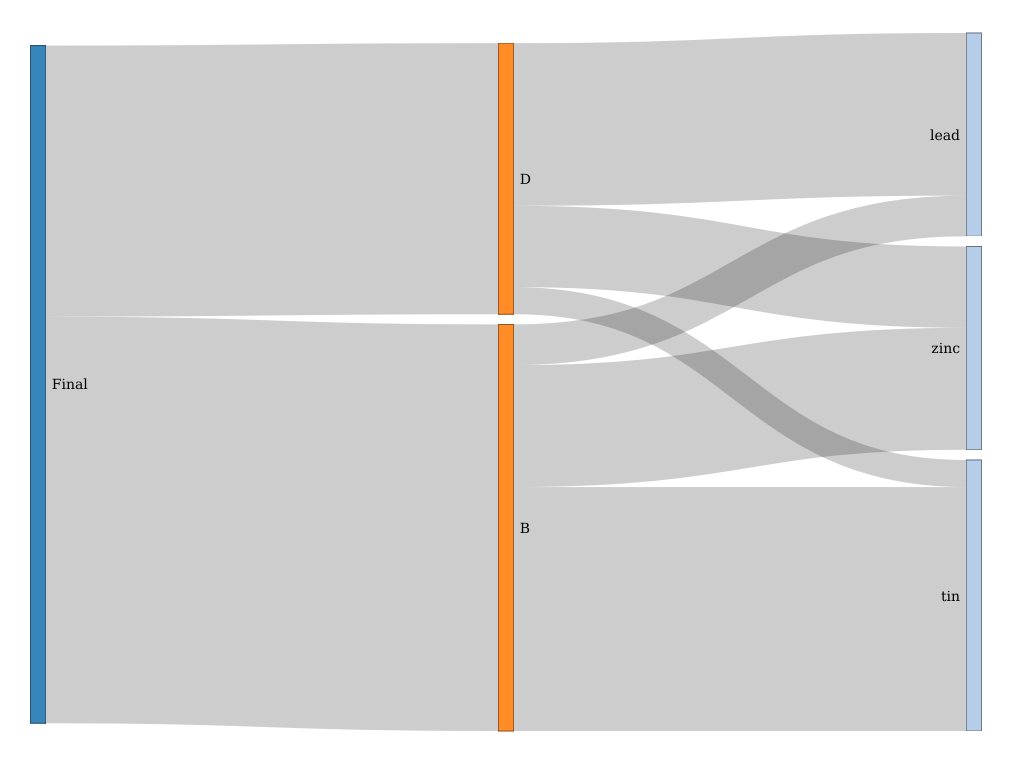 The example AIMMS and R projects we will refer to in this article can be downloaded from here. The download contains:

In addition to the prerequisites outlined in Development Tools, you will need to install the below for this example.

model.R contains functions which take in a JSON file (in the required format) and return a sankey diagram in HTML and PNG formats, using the networkD3::sankeyNetwork function. sankeyNetwork requires two data frames as input - Links and Nodes, as shown below. The group attribute of Nodes is optional but is used to control the coloring of the nodes but it is required that the source and target values in Links, and node in Nodes are 0 indexed integers.

In api.R, we decorate different functions with special comments to expose them as API endpoints using the plumber package.

Lines 11 and 15 are required to specify that the response of this API is a PNG image file.

In this example, we have three APIs differentiated by the name following the #* @get comments in lines: 1, 10, 19. Here we define all three endpoints as GET but plumber also supports other API endpoints like POST, PUT, etc. Read more on plumber’s documentation.

In run_api.py, we use the plumber::plumb function to run (or plumb) the API server built in api.R. The port and host address are specified in line 4.

If you run the run_api.R file using source("run_api.R"), a local API server will be started. You can test this server by typing in the url http://localhost:8000 in your browser.

We will use the Postman application to test the other two APIs which need a JSON body as input. Paste the contents of test.json in the Body attribute as shown below.

It will return the output in the bottom tab, as a PNG file or raw html code, depending on which API you call. 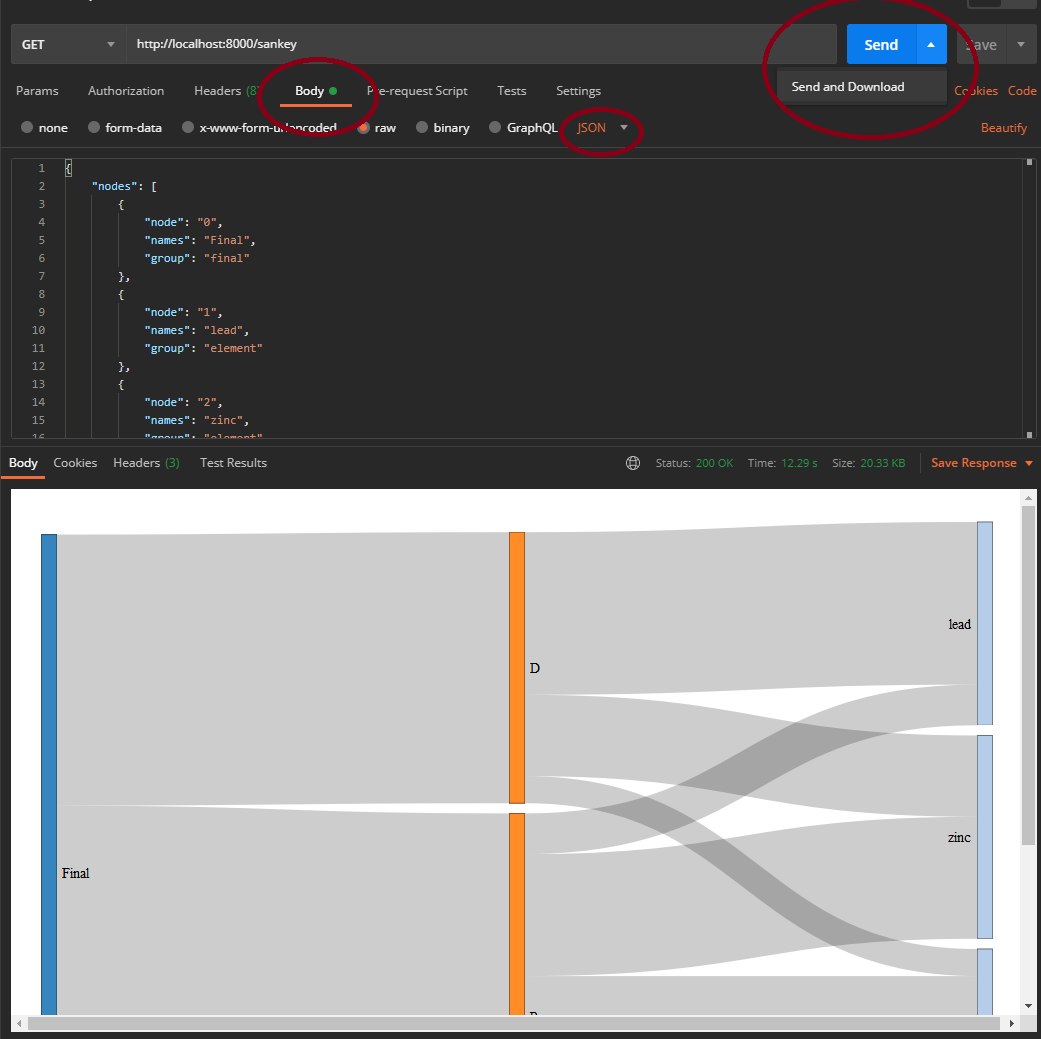 Make sure to set the attributes in the Body tab as raw, JSON. If you click on Send and Download instead of Send, Postman will let you download the response file.

The AIMMS project blendingModel has the input data and math model identifiers in declarations inputData and mathModel respectively.

v_alloyPurchased(i_alloy) contains the % composition of the final alloy. We need to use this identifier to prepare the input for the sankey API.

prWriteJSON creates the input file as the R model expects, using the the mapping file blendingModel/mappings/outMap.xml. we export two dictionaries - nodes, and links and an array for the unit parameter up_percent.

Now we simply use the HTTP library functions to make a GET call to the APIs created in the previous section. pr_healthCheck to check the status of the API and pr_iSankey to call the /sankey endpoint.

As the /sankey endpoint returns a PNG image, we do not need to read any data into AIMMS. Instead, we move the response file to the MainProject//WebUI//resources//images folder to be used by the Image widget, using FileMove().

Running the run_api.R script starts an API server on the local/development machine, on http://localhost:8000 or http://0.0.0.0/8000. These URLs will not be accessible to apps published on AIMMS PRO or AIMMS Cloud.

Hosting Plumber discusses some deployment options. As we did with the Flask APIs in How to connect AIMMS with Python, we will use Docker to deploy the Plumber APIs as well.

The image built using this dockerfile uses Rocker’s RStudio as a base. We use the RStudio version instead of the base rocker as some of the packages used in model.R need some dependencies that the base image does not have. Similarly, we install other dependencies like curl and libsodium in Line 4. Typically, a base docker image that satisfies all our needs can be found on sources like DockerHub or GitHub. If not, we will have to build our own custom dockerfile like in this case.

Lines 7 and 8 install R packages remotes and renv, only difference being in Line 8, we install a specific version of the package from the developer’s repository instead of from CRAN.

You can install all the required packages using either of these methods, but we use the renv::restore() as we did during development in Line 13.

Line 18 will run the run_api.R script when a container built on this image is started.

The below commandline prompts will build a Docker image of the name imageName:latest and start a container. Building an image from this file takes up to 10 mins, bulk of the time being spent in installing the R packages.

This docker image can now be pushed to a container registry on a cloud service provider like AWS or Azure, from where the API server can be hosted.