Application initialization and termination with libraries

If you want some action to happen each time you open the app, say reading data from a database - you can refer to the corresponding AIMMS procedure in one of the initialization procedures. A thoughtful model builder, before coding, may consider the questions:

The purpose of this article to give you a better understanding of the initialization and termination of an AIMMS app. With this understanding, you can provide an informed answer to the above questions and to the questions below, in the context of the app being developed:

In this article, the above questions are not answered directly. But the answer follows by creating a small app and testing with it as presented below.

Example application to do the analysis

To investigate initialization and termination in detail, the app InitTerm is created that can be downloaded here. The InitTerm app has the following overall structure: 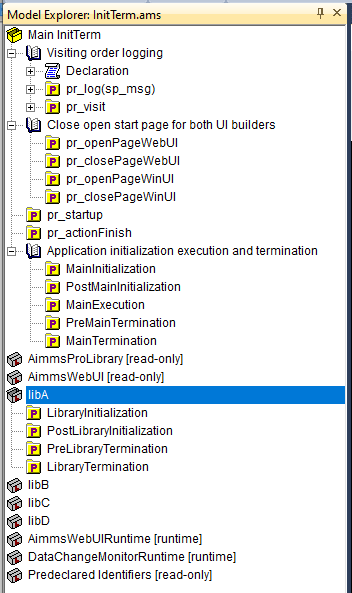 The purpose of the procedure pr_visit is to mark the visiting procedures.

The procedure pr_visit has the following simple code:

whereby the procedure pr_log outputs the line either into the session log or to a file, depending on how the app is called.

Subsequently, a call to pr_visit is placed at every procedure that might be involved in the initialization or termination. In addition, a case is saved whereby the value of p_visits is set to 50. This case is set to the startup case.

Opening the app in AIMMS developer, and pressing the Bye button in the opened WinUI page results in the following visit.txt file:

There are several remarks to be made about this log:

The columns of the above table are: