Use Formulas as Data¶

A mathematical formula is considered data within an application when it is read in as a string during the application’s runtime, and subsequently used in the construction of selected assignments and constraints. The concept “Formulas as Data” can be applied to several optimization apps, for instance those that deal with “Blending on Specification” and “Asset Management.” In these types of applications, the benefit of the end-users is that they do not have to share these formulas with anyone else, including the developers of the apps. For such apps, good formulas are expensive to develop and having good formulas provides a competitive edge to these end-users. In AIMMS, formulas can be used in the following way:

The two identifier types, string parameter and macro, effective at different times as far as the AIMMS system is concerned, need to be combined in order to support the concept “Formulas as Data.” How do we go about this? This blog post highlights selected portions of an AIMMS application (code included at the end of this blog post) which creates a formula representing a one argument function, say f(x), at runtime. The application uses the formula in two ways:

Suppose we have the formula and its argument in the string parameters:

Then we want to create a macro holding the above as definition: 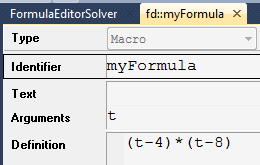 We start by creating a runtime library, using prefix "fd" and a declaration section therein:

Within the runtime declaration section, we create a macro as follows:

As you can see, the text of the argument and the formula is simply copied to the arguments and definition attributes respectively. Now that we have defined the macro myFormula, we can use it. We will do so in two ways. First, we will create the points for a curve, then we will use it to solve the equation myFormula(x)=0 Using the formula to draw a curve To create a curve that looks as follows:

The procedure to create the curve is now as follows:

The "Draw" button will execute the above procedure and present the curve as mentioned at the beginning of this section. Using the formula to solve an equation of the form ``f(x)=0`` A typical exercise with one argument functions is to solve an equation of the form: f(x)=0. To solve such an equation, we first need to construct it. Again, as the formula is present in the runtime library, we also need to create the constraint in that runtime library. This is done in the following way: 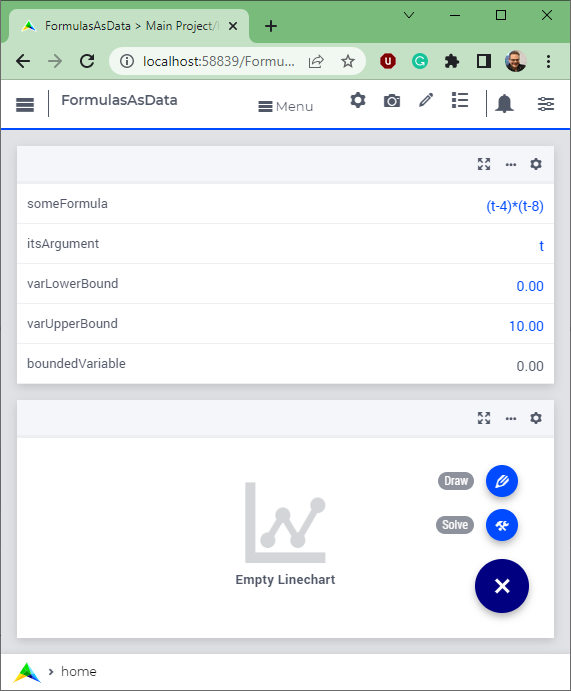 I invite you to play with this AIMMS application, changing the formula, argument and bounds. In addition, observe the curve and the result for boundedVariable after pressing the buttons labeled "Draw" and "Solve".

AIMMS combines three features: string parameters, macros, and Model Edit Functions to enable the concept of “Formulas as Data.” A simple illustration of this powerful concept is provided by using the constructed formula in two manners: by approaching a function via the curve object and by solving a single equation model of the form f(x)=0.

This article is part of the series on Model Edit Functions. Other articles in this series can be found here:

Last updated: Jun 06, 2019
Give feedback on the AIMMS Community