Library of functions and procedures¶

Creating libraries to share/reuse functionality in multiple projects is a powerful feature of AIMMS. In this article, we present some best practices and tips to create such libraries of functions and procedures.

The following are discussed in detail:

This AIMMS project is used as an example for the below.

A good way of organizing your library is as follows: 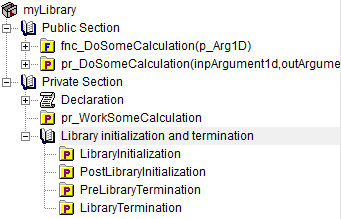 There are three remarks on this organization:

The mechanism to realize “any one-dimensional numerical vector” is illustrated in the following call:

When this function starts, the local set s_ImplicitSet is instantiated with s_modelSet1 based on the following information:

Similarly, the below call instantiates the local set s_ImplicitSet with s_modelSet2.

The data flow between formal and actual arguments is summarized below:

Side effects are not allowed for functions.

A side effect is when during the computation of identifier A, identifier B is modified as well. The AIMMS language limits side effects. Consider the following example:

When the evaluation of fnc1 in the above expression, modifies C, there is a side effect. The reason to avoid such side effects is that it becomes hard to understand what the outcome should be, because it is not specified in the AIMMS execution engine which identifier is to be evaluated first: C(i,j) or fnc1( b(i,j) ). A nice consequence of this design choice is that the sparse execution system can make more strict assumptions on the behavior of the data structures it reads and thus execute faster.

AIMMS Functions are designed to be used in expressions, including indexed expressions, and in definitions of parameters. To avoid side effects, the following restrictions are placed on the body of a function:

AIMMS Functions cannot be used in the expressions of constraints definitions and variable definitions.

Relative to functions, there are much fewer restrictions placed on the statements that can be executed in a procedure. This allows you to model much more complicated data flow using procedures.

To illustrate, the above example will be extended to copy data to a set and parameter in the private section of the library.

Consider the following identifiers private to the library interface we are developing:

These identifiers are used by a procedure private to the library interface:

To facilitate this mechanism, the procedure that can be used outside the library as follows:

The instantiation of the arguments is done in a similar way as with functions and not discussed here. More interesting is the copying of the arguments to the sets and parameters private to the library as illustrated in lines 5-9 above:

The data flow is now summarized in the following picture:

The above mechanism is used in Data for optimization libraries. That article also illustrates the use of indexed output arguments.

The use of procedures inside expressions is limited to scalar evaluation. Typical examples are:

Both line 1 and line 3-5, are use cases of old-style error handling.

Line 1 is the allowed exception for side effects. It is allowed if the assignment doesn’t bind any indices.

A better way of error handling is introduced here.

The use of procedures in expressions is not needed, as status information can be passed in output arguments.