In addition to BARON and KNITRO, you can also use the AIMMS Outer Approximation Algorithm (AOA) to solve mixed integer nonlinear programming (MINLP) problems in AIMMS.

You can use the AOA algorithm by adding the system module GMPOuterApproximation to your project. This module uses the functions from The GMP Library. You can install this system module via the Settings menu as Settings > Install System Module and select the GMP Outer Approximation Module to be installed. 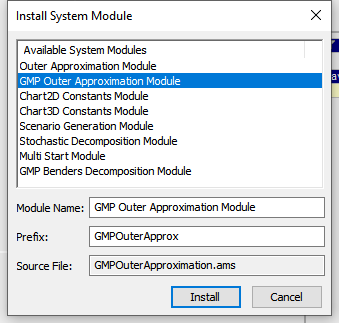 The deprecated version of AOA is still available as a system module as seen in the above image (first in list). However, we strongly recommend you use the GMP version, reasons detailed in the next section.

Read more about our Product Lifecycle on AIMMS Docs.

GMP-AOA is not a solver and cannot be called using the normal solve statement. Instead you should use:

There are several reasons why you should use GMP-AOA instead of the legacy AOA:

In the special case that the MINLP problem contains only convex quadratic and/or second-order cone constraints also linear solvers like CPLEX or GUROBI can be used.

The AOA provided by AIMMS is among the best Mixed Integer Nonlinear programming solvers according to A review and comparison of solvers for convex MINLP, published in Optimization and Engineering.