Encryption is typically used to protect the intellectual property (IP) in your AIMMS model and libraries. AIMMS also allows you to restrict access to your application.

As of AIMMS 4, all project sources are text-based. This allows you to use version control software. However, explicit steps are needed to create encrypted code.

The first option is by creating an Aimmspack file. As you have seen in an earlier Overview: Model Sources, Version Control and aimmspack Files, Aimmspack files (in AIMMS 4) are always encrypted. You can create an Aimmspack via menu File > Export End User Project. Once you have selected that menu, you will be asked to specify a file name for the Aimmspack, followed by a dialog “Encryption of Exported End-User Project”. 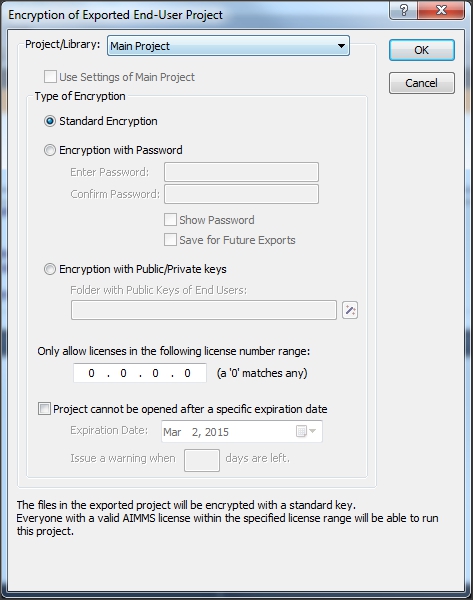 In this dialog, you can specify one of the following three types of encryption:

Next to the type of encryption, you can also specify the license number information or expiration date. (More information can be found in Project Security) The information that you specify here, will be stored as part of your project in the file ..\\MainProject\\Settings\\EndUserEncryption.xml.

After you click OK in this dialog, AIMMS will show a second dialog where you can specify which files AIMMS should exclude from the Aimmspack. This information is stored in the file ..\\MainProject\\Tools\\ProjectExport.xml. The information in these two files will be used, as default, the next time you create an Aimmspack.

The second option is using a command line argument to either generate an Aimmspack or a folder with encrypted source, via one or two of the following commands:

In case you generate the encrypted source via the command line option, AIMMS will use the settings of the files EndUserEncryption.xml and ProjectExport.xml, as mentioned above. This means that if you want to change the default settings, you need to first manually create an Aimmspack and set the correct options.

For example, if you have a project with two libraries (Protected Library 1 and Protected Library 2) for which you want to protect the contents, the following commands will create a partially encrypted project:

The rest of the model will be accessible for everybody. More information can be found in Project Security.