Change the Frequency of Progress Updates 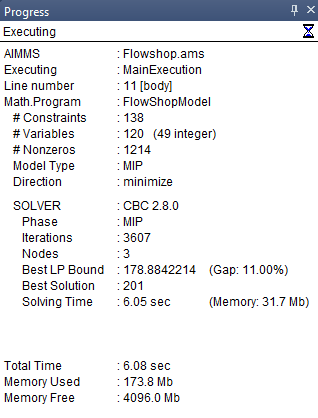 If progress updates are done very frequently then it can have a negative influence on the performance. If progress updates are rare, it can take minutes before the progress window is updated again. As a side effect, AIMMS can become seemingly non-responsive, as progress updates are often the only times during a solve in which the solver will give the control back to AIMMS for a brief moment, such that AIMMS can update pages, check for interrupts, etc. (The control is also given back to AIMMS if a callback procedure is called, or during function or derivative evaluations while solving a nonlinear problem.)

In AIMMS 4.6 progress updates will, by default, be based on elapsed time. The main advantages are that (1) it is supported by all solvers, (2) it can be used even if the iterations count is not changing during some phase of the solving process, and (3) it is problem and solver independent, meaning that you do not have to change any progress option setting if you build a new model or switch solvers. The new option will be named Progress Time Interval. The old Progress Solution option will still be available but it will become inactive by default. It will be possible to combine both options such that progress updates are based on time and iterations.

Note that even after this change there is no guarantee that you will see progress updates regularly all the time. Doing progress window updates requires that the solver passes updates to AIMMS, which does not always happen.