The CVRP Library can solve Capacitated Vehicle Routing Problems (CVRP). There are four different options of formulations. One of them is called Time Windows and will naturally only be used for a CVRP with time windows. All the other formulations can be used for problems without time windows; the Explicit Dantzig-Fulkerson-Johnson, the Implicit Dantzig-Fulkerson-Johnson and the Miller-Tucker-Zemlin formulation. In this article these three formulations will be tested and compared.

There are a lot of examples of CVRP’s available on the internet (for example on this website: https://neo.lcc.uma.es/vrp/vrp-instances/). However, these data sets mostly contain more than 20 nodes. The Explicit Dantzig-Fulkerson-Johnson formulation isn’t capable of solving problems that big. So in AIMMS I made a procedure that created 30 datasets with 8 to 20 nodes. The datasets contain 8 nodes, 10 nodes, 12 nodes, 15 nodes, 17 nodes or 20 nodes. There are 5 files for each amount of nodes. The following data is randomly generated: the amount of vehicles, the x-coordinates and y-coordinates of the nodes, the demand of the nodes and the capacity of the vehicles. The function Uniform(min,max) is used and will choose a random number between two values. The data is selected as follows:

The data sets were tested for the three different formulations. A maximum of an hour was set to solve the problem. There are three important things when looking at the results:

Most of the datasets were completed normally and an optimal solution was found. Comparing the distance of the best solutions would therefore not be useful (because they are all the same). It is however possible to compare the time it took to find that solution.

The average time it took to find an optimal solution for a dataset with a certain amount of nodes is calculated and shown in the table below. Only the results that have NormalCompletion as Solver Status are included.

It’s easy to see that Miller Tucker Zemlin is generally the fastest formulation. Especially for the datasets with larger numbers of nodes.

It is also interesting to compare results of larger datasets. The Explicit Dantzig-Fulkerson-Johnson formulation isn’t capable of solving problems of larger datasets, but the Implicit Dantzig-Fulkerson-Johnson formulation and the Miller-Tucker-Zemlin formulation can be compared. This time I used the same procedure to create 12 datasets with 40 to 100 nodes. The datasets contain 40 nodes, 60 nodes, 80 nodes or 100 nodes. There are 3 files for each amount of nodes. The data is generated in the same way except for the number of vehicles. This time it is a random number between 2 and 1/10 of the amount of nodes.

The solver status for almost all the datasets was ResourceInterrupt and the program status was IntegerSolution. This means that an hour wasn’t enough to find an optimal solution, but a feasible integer solution is found. The solver time can therefore not be compared with each other (they are all an hour). However, you can see which formulation found a better solution within an hour by comparing the distance of the best found solution. The result of the last dataset (with 100 nodes) of the Implicit Dantzig-Fulkerson-Johnson formulation had a program status of IntermediateInfeasible. This means that it wasn’t possible to find a feasible solution. So this data file shall not be taken into account in the comparisons. In the table below the distances are shown for the best solutions of both the formulations. In the last column it says which formulation has found the best solution. 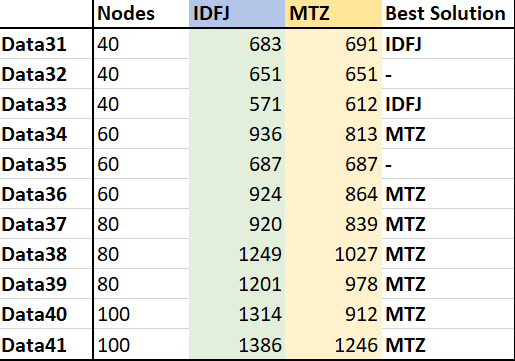