This article is part of a series of examples on how to connect AIMMS with models built in Python or R. If you have not already, read Connecting AIMMS with Data Science Models before continuing.

In this article, we will show how to integrate an AIMMS app with a KMeans clustering model built in Python using scikit-learn. The clustering model is used to identify centroids/centers of gravity in the network of nodes as shown below.

You can read more about how participants used clustering algorithms and MIP to solve a supply chain problem on our community: AIMMS MOPTA 2020 Results.

The example AIMMS project and Python modules we will refer to in this article can be downloaded from here. The download contains:

In addition to the prerequisites outlined in Development Tools, you will need to install the below for this example.

app/kmeansClust.py has the function mykMeans which takes in the number of clusters numClusters and latitude-longitude data coordData and fits a KMeans model. A sample input file is provided in app/input.json.

Listing 1 Note that only some rows are displayed here¶

app/dataio.py contains functions which prepare the data for consumption by myKmeans and our AIMMS project. For example, dataFromCluster retrieves data from the input.JSON and simply transforms the latitude and longitude arrays into an array of tuples.

In app/main.py, we use the Flask package to expose different Python functions as APIs.

In this example, we have two APIs differentiated by the first argument of @app.route calls.

If you run the app/main.py in terminal (using python main.py), Flask will start a local web server. You can test this server by typing in the url http://localhost:8000/hello in your browser.

Now, testing the clustering function/API in a browser is not as straightforward as this one requires input data in the JSON format (as highlighted in line 15 in the above code-block). We will use the Postman app to call this API by pasting the contents of input.json in the Body attribute as shown below. It will return the output of mykMeans as a JSON object. 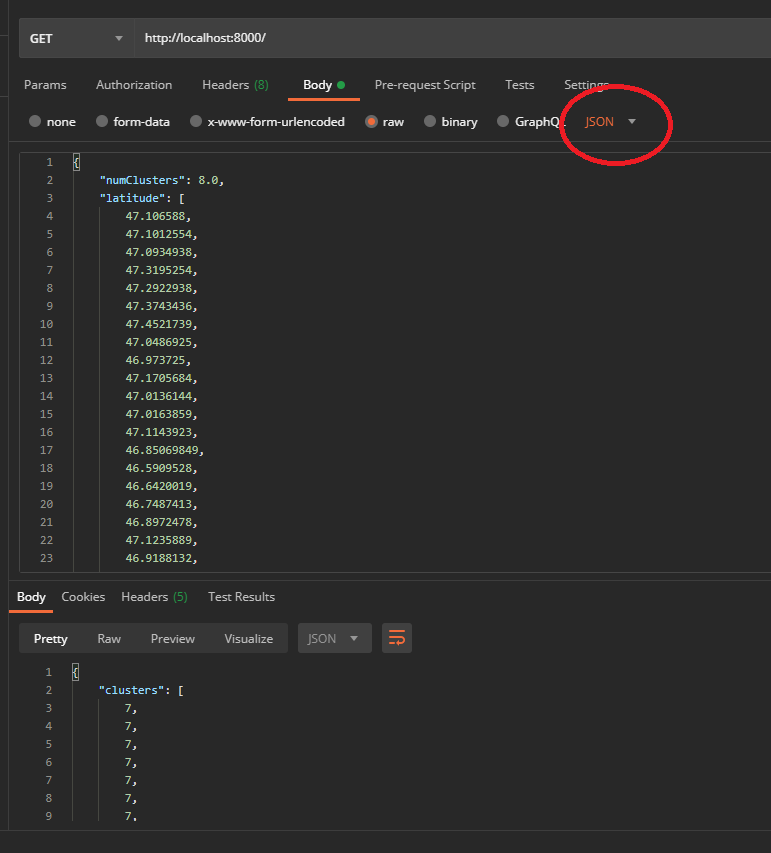 Make sure to set the attributes in the Body tab as highlighted in the image.

The AIMMS project aimmsModel has the identifiers pLatitude(iLoc), pLongitude(iLoc) and pNumClusters which we need export in a format similar to input.json.

prWriteJSON creates the input file as the Python model expects and prReadJSON reads the result file into AIMMS.

It is not necessary that the pretty argument for dex::WriteToFile is set to 1 but it helps with readability of the json file, which is particularly helpful during development.

ObjectMapping initializes a key-value tree inside which ValueMapping is the first node which holds the scalar parameter pNumClusters. To write out indexed AIMMS identifiers, we can use the ArrayMapping like in line 4 which writes out pLatitude as an array value to the key latitude.

Note the difference between the first mapping (for pCluster) and the remaining two. iterative-existing=1 is added to the map of pCluster because the elements iLoc already exist in our project, whereas for the other two - we are letting the DataExchange library create new elements in the set sCentroids. Read more in AIMMS Docs.

Now we simply use the HTTP library functions to make a GET call to the API created in the previous section as shown in procedure prCallAPI.

The highlighted lines 9-12 are equivalent to setting the body attributes in the Postman app. Make sure that the url in spURL includes the appropriate http:// or https:// prefix.

When the app/main.py file is run in terminal, a warning is displayed.

The app server running on http://localhost:8000 or http://0.0.0.0/8000 is available on your local machine and to your AIMMS Developer instance but what about apps deployed to AIMMS PRO or AIMMS Cloud? .. If your AIMMS PRO server is also running on the same machine, this Python model can be still be accessed using the same url. However, that is not a viable option if you are using AIMMS Cloud.

Some deployment options relevant to Flask are discussed on their project website.

We will however discuss deploying this web app using Docker, which is in fact similar to (or uses the same principles) some of the options discussed in the above link.

The image built using this Dockerfile uses Tiangolo’s nginx server as a base and it comes with Python 3.8 already installed. Lines 7-8 copy the Python modules we developed onto the base image and lines 11-12 install the packages required from the requirements.txt file. The Dockerfile is basically automating the installation of prerequisites as outlined in Installing prerequisites.

The below commandline prompts will build a Docker image of the name imageName:latest and start a container. Most text editors or IDEs (such as VS Code or PyCharm) have a Docker plugin now. Read more about these options in Docker Docs.