In this article we explore how you can authorize access to information within your AIMMS app by creating and managing user groups.

This article is part of a series of three to enable AIMMS app developers to model file sharing securely. See also:

AIMMS PRO is a multi-user environment, designed to host several Apps used by several end-users. Information is shared by these users via these applications. Depending on the role of the app user in the organization, selected information may or may not be accessible. For instance, a planner may change the production plan, that plan can be inspected by management, but is not accessible to the HRM staff.

Let us consider an example. 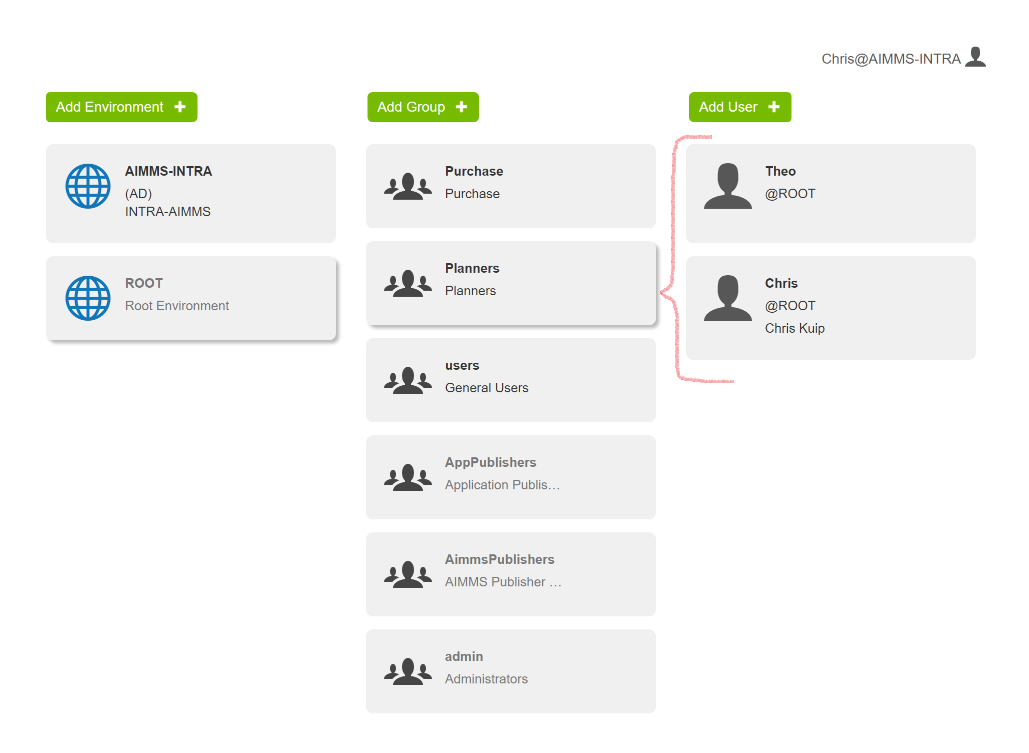 This picture is taken from my AIMMS PRO test environment. Besides the predefined groups Admin, AimmsPublishers, AppPublishers, and Users, there are two organization specific groups added to this environment: Planners and Purchase. I have selected the group Planners and made Theo and myself users of that group. If I want to make Theo a member of Purchase as well, I just drag Theo’s icon to the Purchase group.

A first method with which you can determine who accesses certain kinds of information is by selecting users when an AIMMS App is published. At that time, the access rights can be assigned per environment, per group or per user as illustrated below:

Here the FlowShop app may be run by a planner.

This brings us to a second method of granting access, which is within the application itself. The AIMMS PRO library allows an AIMMS App to identify the current user and identify the groups that user is in, namely via the procedure: pro::GetCurrentUserInfo.

Let us continue our example. A planner may change the start and duration of production activities which are in the model represented by the parameters startProduction(a) and durationProduction(a) respectively.

For instance, using the declarations:

The following call places the current user and his groups in the above declarations:

Now we use this information to check whether the current user is a planner, and if so, make the production plan data visible and modifiable.

This example is rather specific for planners, but it is easy to generalize.

After executing this code, only if the app user who is a member of the group Planners, he will see data in the widgets referencing 'startProduction', and 'durationProduction'.

Note that a user can be a member of multiple AIMMS PRO user groups; that is why the “+=” is used above – by executing code similar to the above for each potential user group the current app user belongs to, that user is granted data access to the union of identifiers that are specific to a user group.

In this blog post we have considered restricting information to an AIMMS app user based on the roles assigned to that app user via the AIMMS PRO user groups. In the upcoming blog post in this series, we are going to discuss the building blocks for exchanging files between AIMMS PRO storage on the one hand and the storage system directly available to the app user.

A simple Who am I app: AIMMS project download 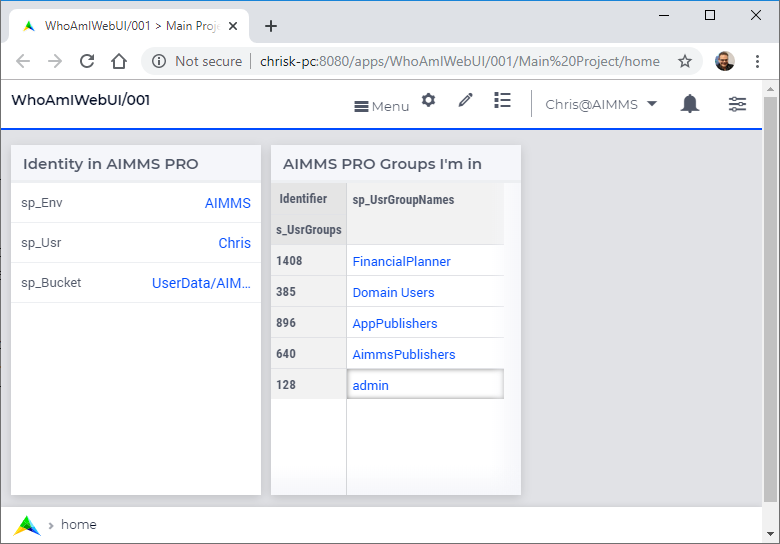 You can take a screenshot when asked for credentials on AIMMS PRO and then close it.